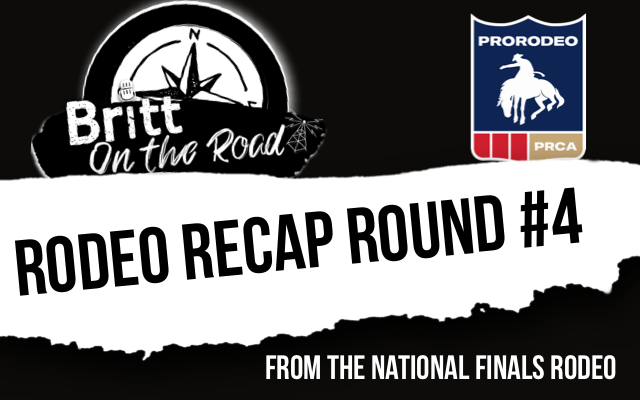 “It was about just going back to the basics and have fun,” Sundell said. “Do what you’re supposed to do, I guess. I didn’t forget how to ride. Just people don’t seem to fall off like that very often so when it happens, they think something is wrong. But it’s part of rodeo.”

“It’s a great feeling. I’ve been here many, many times but this round win might mean the most. My little boy told me last night, ‘Daddy will you get a buckle? I want to go on stage.’ And I said I’ll tighten up a little bit.”

Bull rider Parker Breding has picked a great time to get on a heater.

The veteran bull rider won his second round of the 2021 Wrangler NFR with an 84.5-point ride on Universal Pro Rodeos’ Doctor X.

Breding, who won Round 2, is thrilled with how things are unfolding.

“It’s hard to put into words just walking down this hallway again but I’m just glad to hear another whistle again.”

“Just trying not to think about that right there is going to be a big part of it,” Breding said. “I’ve already got people coming up to me and trying to make future plans about all of this. I need to shut all that out and just keep doing my job.”

They were only two bull riders to make the eight-second whistle in the round and each earned $43,544 including ground money.

“Felt great,” Boquet said. “I like any day when you squeak by the whistle or when you’re on the bull when the buzzer goes off. The first three go-rounds whoever went first stayed on, so I didn’t want to be the guy that broke the streak.”

The duo took a step in that direction by winning Round 4 with a 4.1-second run.

“I’ve kind of always started out just trying to play it safe on the first couple of rounds and that kind of got us behind the 8-ball and then we would start going at them like we used to all year. I told Junior I might mess up, but I’m going to go at them as hard as I can every night just like we do during the year and rope the steer we draw and do the best we can, and it worked out for us. There’s a lot of rodeo left and we aren’t halfway done yet. We have to keep same mentality.”

Mayfield gets his second-round win of 2021 Wrangler NFR
After getting his first career Wrangler NFR round win with a Round 2 win Dec. 3, tie-down roper Shad Mayfield was making another victory lap Sunday after Round 4.

The reigning world champion stopped the clock in 7.6 seconds to claim the Round 4 title.

“This was the calf that Shane Hanchey won the first round on, so I knew I had the better one in the herd and I just had to make the best run I could and it for sure worked out,” Mayfield said. “I want more of them, there’s a lot more rounds to go, so hope I get few more. I went out of the average last night and I’m not much of an average type of roper, I try to go fast and win the rounds and that’s what I plan to do.”

Mayfield, who moved up to second in the world standings with $195,910, was quick to credit his horse Rampage.

“He’s amazing, he handles everything with ease. He’s a smart horse and I trust him with everything, I just know he’s going to do his job and I just have to do mine.”

R.C. Landingham snared his third career NFR round win and first since 2016.

The duo split the Round 4 win.

“I’m just happy I get to come and do this (Monday). My main goal the rest of the week is have a strong mark out and wow them the first jump.”

Feild, the reigning and five-time world champion, leads the world standings with $203,130.

Landingham is making his third NFR appearance with his first couple coming in 2016 and 2017. He had been battling a left shoulder injury for the last several years.

“It has been a long road (with injuries) and injuries are a big deal in the event and it was rough getting through,” Landingham said. “After my third surgery on my left shoulder and it feels as good as ever, thanks to (Dr.) Tandy Freeman and Doug Champion (at Champion Living Fitness). That was a fun little horse. I have never been on him. He was a little hard to get things going, but once he stalled out there it was a lot of fun.”

“I almost didn’t make the NFR this year, until Salinas (Calif., Sept. 23-36),” Duvall said. “I wasn’t even sure I would be here, so I just decided I’m here and I am going to ride hard and make each run count.”

“That was the one that Riley won the first round on, so I knew if I just did my job, I had a really good chance for the win,” Lummus said.

“I had some OK runs, but I just didn’t get to the top, I just needed to change a couple small things and not get so serious about it and just do what I know how to do. I was getting down a bit, but after visiting all the cancer kids today, it made me realize that no matter how bad I think things are, those kids are fighting harder than I ever will have to. When you look at that, I got things back on track.”

“It is great to be here on this big stage and ultimately it is really just another run. Riding a young horse each run is a development run and it was definitely a development run for him. He has not been competing long. He didn’t get ran as a 4-year-old. His first futurity runs were when he was a 5-year-old and he doesn’t even really have much rodeo experience. I took him in June and ran him at a few this summer.

“I am just trying to build his confidence. He has never been in a big setting like this, so I am trying to be very concise and careful on how I handle him, how he reacts to it, each step he makes and really try to help him stay focused and calm. This way he can go out and make a dominating run. He has a lot to give and a lot to offer and my goal is to keep him healthy and happy so we can go out, have some fun and make some great runs.”

all information courtesy of the PRCA