DES MOINES — The Iowa Supreme Court’s acting chief justice says the state’s court system is going through a transition, but Justice David Wiggins downplays the idea there’s any sort of conflict between the executive and judicial branches of state government.

“The court’s in pretty good shape and it’s an institution,” Wiggins says. “It will endure…I’m just a temporary caretaker. It’s a job and when I leave, there’ll be another one take over and I think it will do fine.”

Republican legislators passed a law last year to increase the governor’s power in appointing members to the commission that nominates judges and Governor Kim Reynolds will fill two vacancies on the court this year. In addition, the governor and GOP lawmakers are collaborating on a constitutional amendment that would undo court rulings that struck down new abortion restrictions.

Wiggins was appointed to the Supreme Court by Democratic Governor Tom Vilsack 16 years ago and Wiggins rejects Republican charges that he’s been part of an “activist” court. 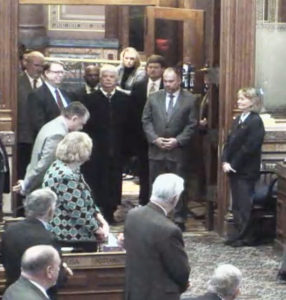 This debate comes as the court deals with what Wiggins describes as the “shockwaves” from the sudden death of Chief Justice Mark Cady in November. Wiggins delivered the annual Condition of the Judiciary message to legislators Wednesday, using much of Cady’s first draft of the speech.

“It was sad, because Justice Cady was a close personal friend,” Wiggins told reporters. “But, you know, the institution has to go on and we have to do what we have to do.”

Wiggins announced last Friday that he would retire from the court in early March. Wiggins told reporters he had planned to retire a year ago, but promised the late Justice Daryl Hecht he’d stay on to wrap up some of Hecht’s work. Hecht resigned in December of 2018 and died four months later of skin cancer.