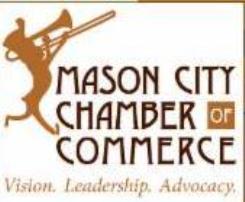 MASON CITY, IA – Despite the heartbreaking cancellation of the 2020 North Iowa Band Festival, the community can enjoy “spirit week” activities – from a distance. Daily activities will honor Mason City’s rich musical heritage and will incorporate a new version of traditional Band Festival entertainment.

Meredith Willson’s birthday and the North Iowa Band Festival were celebrated on Monday with a tribute at Elmwood Cemetery. Mason City High School Drum Majors Bailey Gunderson and Major Shaye Theobald placed flowers at the grave site and took part in a short program organized by the Chamber of Commerce.

Chris Frenz, who typically serves as the master of ceremonies for the Festival, interviewed the 2019 North Iowa Band Festival King and Queen Jacob VerHelst and Alana Noss. A video of this chat, which features the royalty’s festival memories, will be posted to the festival website and social media platforms on Tuesday.

Next, at 7PM on Wednesday, May 20, the band Brad+Kate, who were scheduled to perform at this year’s Festival, will hold a virtual concert on Facebook Live! This musical duo believes that live music is unlike anything else and can’t wait to share a special performance for the community.

A “Big REVERSE Parade” is scheduled from 2-4PM on Thursday in front of the Commerce Center (9 N Federal Avenue.) This event will replace the traditional Saturday morning parade. Festival staff will distribute pre- bagged candy and commemorative buttons to cars traveling NORTH in front of the building. Participants are encouraged to decorate their vehicles and drive slowly on North Federal Avenue, entering from West State Street. Participants must remain in their vehicle, and staff will be wearing masks and gloves.

On Friday, May 22 local favorites Betty and the Gents will perform at 8:15PM Live on Facebook. A special “Music Man” tribute set is planned that promises to “knock your socks off.” This group is a frequent Festival performer and will share music to bring the community together, especially during a time like this.

The Festival committee thanks Drum Major Sponsors First Citizens Bank, Hanson Foundation, Principal Foundation, and Union Pacific Foundation, along with many generous contributors, volunteers, and supporters, for their continued support. More information about the North Iowa Band Festival can be found at nibandfest.com.