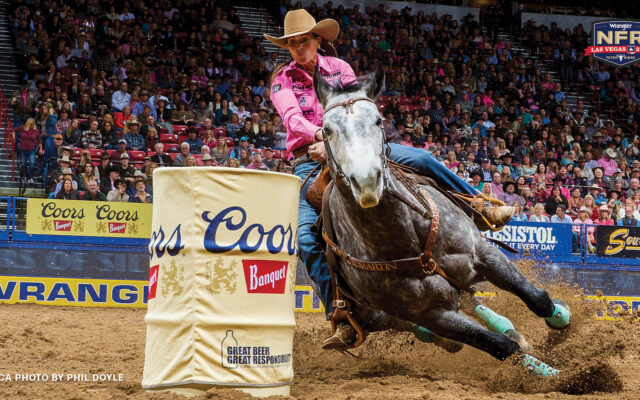 On Monday, Kinsel split the Round 5 win with Lockhart as each had 13.52 seconds.

“It’s special here. Las Vegas and the Thomas & Mack Arena have their own unique energy that you remember, and you want to get back to,” Kinsel said. “To come back and be able to do well again, it’s awesome. This rodeo is so tough. This field of barrel racers is one of the toughest you’ll see. I’m just thrilled to have the success that we are because nothing is guaranteed when you’re here.”

Kinsel took a moment to talk about the preparation she and her star horse Sister go through.

“When her and I were younger, there was definitely more practicing involved with the setup and trying to get the pattern down,” Kinsel said. “After we’ve been here a couple of times, I’ve decided not to overwork her now and really just trust the process of my horse and trust her skill. She seems happy and it appears to be working.”

Lockhart, a veteran of 16 NFRs, discussed the horsepower she is using.

“I’m riding a young horse and he’s gotten stronger every night. We broke the ice in Round 2 and have continued to place higher each night. My job was really to get him to his spot and once he did, I thought, ‘well, here we go,’ because that first barrel is crucial here. That really makes a difference.

“Every horse is a little different. Some take right to it while mine has been hesitant and a little bit scared of everything. There’s a lot of energy in the arena so I commend him for having the focus he’s had because there are a lot of distractions.”