CHARLES CITY — With all the debate in Washington D.C. about building walls, students at Charles City High School are celebrating their newly-constructed wall — which has them reaching new heights.

“It was pretty cool, knowing that we designed it and helped put the holds on,” Olson says, “and I just got to climb it.”

Olson is part of the school’s “Expeditions” class which tackled the project. It includes four routes with different difficulties tailored to the climber’s experience.

“The wall straight up is the easiest one and then you have the easier holds to get up,” Olson says. “Ours is slanted and then it goes up and that one’s a little harder so we have the difficult holds on it.”

The class began desiging the wall last spring and construction began in September. Instructor Rob Pittman says the wall is a collaboration of the students’ designs. 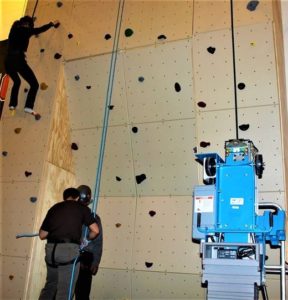 “One of their key features is the middle two areas. This is part of the student design,” Pittman says. “Four or five of them had basically the left 12 feet of it was their design. We went with it. I had a student come up yesterday and say, ‘Hey, that was in my design,’ and I said, ‘Yeah, it was, bud.’”

The climbing wall was paid for through grants and several fundraising efforts. Pittman says the wall not only offers a way to stay fit, but could provide work-related experience.

“The school has approved me to get certified as an indoor rock climbing wall instructor,” Pittman says, “so once I get that certification, anything that I teach the kids translates into maybe working at a rock climbing wall in college or maybe getting this as part of their career field.”

The wall opened Tuesday and is in use, but the class plans to continue building more climbing panels on either side.