DES MOINES — The chief justice of Iowa’s Supreme Court is asking legislators for a $7.2 million boost in the budget for the judicial branch of state government.

“Your justice system provides critical, unduplicated services to Iowans,” Cady said this morning in the annual “Condition of the Judiciary” address to legislators. “…Our future can no longer be about taking small steps or standing still. We need to think big and take big steps.”

Cady would direct a third of his requested increase to a digital initiative, using the money to develop electronic warrants, for example, and start paying for the court’s digital services with taxpayer dollars rather than court fees.

“The age of technology is propelling courts into a new age of justice,” Cady said. “…Our ‘Digital Opportunities’ initiative concerns projects such as….text messages to defendants and other court users…and online dispute resolution. 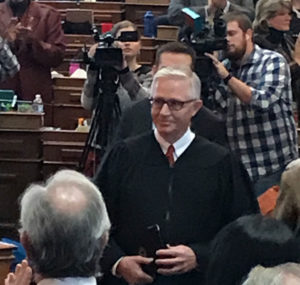 Justice Cady enters the chamber
for his speech.

“…Imagine a time when law enforcement officers will no longer need to drive from the scene of an investigation to a courthouse to request a warrant…Imagine a time when defendants receive reminders of their court dates on their phones so there are fewer delays and fewer adverse collateral consequences for defendants.”

Cady’s also warns lawmakers fewer people are applying to be judges because of the pay. He’s asking for nearly $1.9 million extra to finance a four percent hike in judicial salaries. The other big-ticket item in Cady’s request to lawmakers is for rural courthouses. Cady’s asking for enough funding to hire 37 more full-timers to work in the clerks of court offices.

“The judicial branch is committed to providing full-time, full-service access in all 99 counties,” Cady said.

Cady is seeking legislative approval so a clerk of court in one county may assist people in another county.