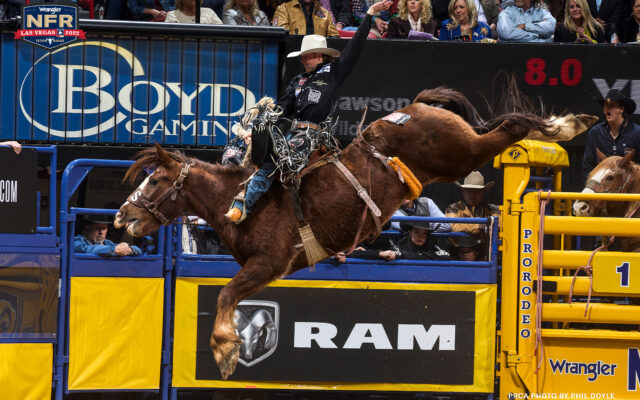 The Canadian tied the Round 9 record with a winning ride of 92 points on Beutler & Son Rodeo’s BDM Mud’s Killer Bee before 17,762 spectators Friday night at the Wrangler National Finals Rodeo presented by Teton Ridge at the Thomas & Mack Center.

“Yeah, that’s a crazy good horse,” said Hay, 24. “I remember when I first started riding broncs and I saw that horse come on through the years to become the legendary status we all know it has. I’d never had the chance to draw that horse before. I saw it on the list, and I told my wife, ‘I’m going to draw that horse at the NFR this year.’ I thought it was going to be in the first round but we got her.”

The ride was noteworthy not only because of tying the round record, but also because it was the final out of Killer Bee’s career.

“I’m not sure it’s even sunk in yet,” Hay said. “It’s such an incredible feeling. Going through that ride, I’m not sure I’ve ever been on a horse that feels quite like that. That’s a ride that’s going to stick with me forever. It’s a special moment and the kind of thing we’ve always dreamed of since we were little.”