Dry areas of the state expand a bit

DES MOINES — June, July and August were all drier than normal months for the state — after we saw a wet spring.

The DNR’s Tim Hall tracks the groundwater and stream flows across the state. “That three inches of deficit has sort of made up for in a way some of the really wet weather that occurred prior to that,” Hall says.

Cities that get their drinking water from underground sources are always watching the levels. “The only area where our Geological Survey folks have a little bit of concern is way along the eastern border of the state along the Mississippi River. The counties running in the southeast corner of the state along the river,” according the Hall. “We’ve got a slight concern over groundwater availability, and that’s back away from the Mississippi River.”

He says part of the issue is the time of year. “It’s really just a product of the growing season where you have all of the row crops pulling moisture out of the ground for their development — combined with a shortage of rainfall. It’s just dried up some of the soil moisture,” Hall says.

The three dry months are also showing up on a wider scale. “We’re up to over 50% of the state is now showing as abnormally dry. And about 12% of the state is in moderate drought — just some patchy areas across the state — and it’s just really crept up on us since August,” Hall says. He says fall is the time of year when a lot of rainfall is not needed as the growing season comes to an end.

“We’re getting into that time of the year when rainfall starts to decline. We want to get enough rainfall to keep the subsoil moisture replenished before the ground freezes, there’s plenty of time for that to happen,” Hall says. “There are no indicators or trends that are getting anybody really alarmed. It’s just really interesting to see how the state has flipped from being just excessively wet — to starting to dry up in some places.”

Hall says the nationwide picture also looks pretty good and there are not big concerns that about drought that might creep into Iowa. 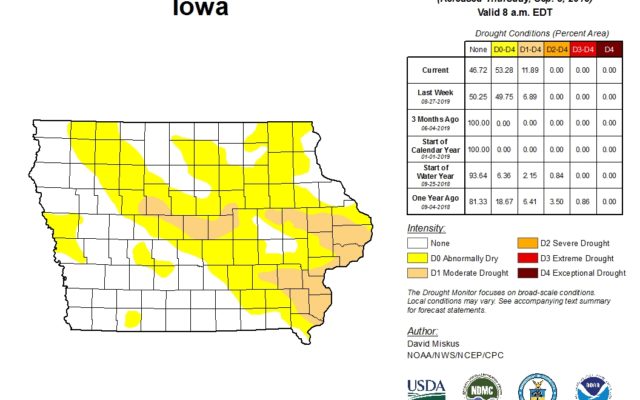