DES MOINES — Governor Kim Reynolds staff has created a one-page document for Iowa felons seeking the governor’s approval of the application to get their voting rights restored.

The previous document was three pages long. The old process also required felons to compile paperwork about any fines and restitution they owe. Reynolds said her staff has access that information online.

“Restoring voting rights is more than a trip to the ballot box,” Reynolds said. “It really resurrects dignity and begins re-entry into life as a contributing member of our communities.”

Reynolds has been pressing lawmakers to set up the process for a constitutional amendment that would automatically restore voting rights to paroled felons. Some of the governor’s fellow Republicans in the legislature say they want to pass a law that would require repayment of all fines and restitution before a felon could get their voting rights. Reynolds has repeatedly emphasized that’s not required under the present system.

“We should never lose sight of the victims,” Reynolds said Tuesday, “but these individuals are making efforts by a payment plan to pay back the debt that they owe and that satisfies our requirement to give them back their voting rights and I would hope, I want to make sure we can stay similar to something like that.” 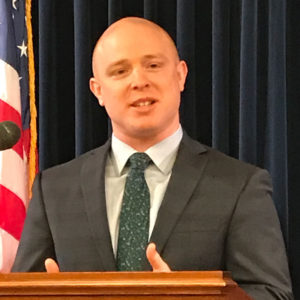 Drew Klein of Americans for Prosperity joined Reynolds at her weekly news conference to emphasize his group’s support of the governor’s effort to automatically restore voting rights felons and avoid requiring that all restitution be repaid before they may vote.

“A lot of times what we end up doing is we create a second tier or a second class of citizens and that in and of itself creates problems,” Klein said. “That contributes to the cycle of recidivism that ultimately creates new victims and imposes recurring costs on taxpayers as well.”

The new, one-page application to the governor for voting rights restoration is being presented to felons as they exit prison. Betty Andrews, president of the Iowa-Nebraska chapter of the NAACP, said the governor is taking important steps to give more Iowans access to the political process.

“But that doesn’t also mean that we are not very much interested in an executive order for voting,” Andrews said, “because we do think that is important in the interim.” 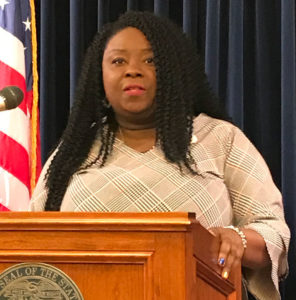 Reynolds said if she issued an executive order, that could be “an easy out” for Republicans in the legislature who’re reluctant to change the constitution.

“I don’t think voting rights should be forever banned and I don’t think that one individual should be making those decisions and I’m going to talk to them about why it’s important and see where we can find — that’s all part of the process — some common ground to get this done,” Reynolds said.

The governor recently began calling paroled felons to whom she has granted voting rights. She’s offering to arrange those calls with legislators, too, to emphasize how much second chances mean to paroled Iowans.