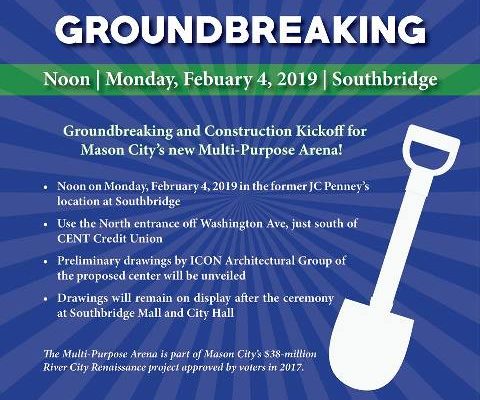 MASON CITY — A groundbreaking ceremony will be held on Monday to commemorate the construction kickoff for the multi-purpose arena that’s part of the River City Renaissance project in downtown Mason City.

The arena is being placed in the former JC Penney location in Southbridge Mall and it’s part of the $38 million Iowa Reinvestment Act project that also includes the addition of a convention center complex to Music Man Square, a hotel in the eastern part of the main parking lot of Southbridge Mall, as well as a performing arts pavilion on the mall’s north side.

Dean Snyder Construction of Clear Lake has already started some work as part of the first phase of the arena project, which includes things like electrical and mechanical demolition, exterior wall and interior partition demolition, and earthwork and mass excavation.

Monday’s groundbreaking event will start at noon, with people attending being asked to use the north entrance off of the corner of 1st and South Washington.

Preliminary drawings by ICON Architectural Group of the proposed center will be unveiled, with the drawings to remain on display after the ceremony at Southbridge Mall and City Hall.