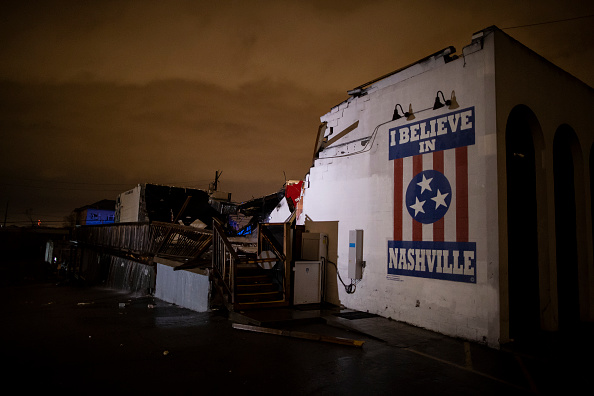 NASHVILLE, TN - MARCH 03: General view of a mural on heavily damaged The Basement East in the East Nashville neighborhood on March 3, 2020 in Nashville, Tennessee. A tornado passed through Nashville just after midnight leaving a wake of damage in its path including two people killed in East Nashville. (Photo by Brett Carlsen/Getty Images)

As you most likely know by now, the Nashville area was devastated with tornadoes earlier this week. There are numerous ways you can help those affected according to Nashville mayor John Cooper. Find a list from StyleBlueprint.com at this link: CLICK HERE

You can also view photos of the damage from The Tennessean: CLICK HERE

Dierks Bentley shared a very personal experience, as he landed his plane at John C. Tune airport shortly before the storm hit.

@astephens1110 and I ducked around this crazy cell and landed at john tune airport around 11:30 last night, coming back from LA. Glad we landed when we did. Wouldn’t have been so good an hour later. It was the cell that turned into the tornado. Lot of people lost their homes, including our drummer, and a lot of people in need. But no one comes together as a city like #nashville does.

Our thoughts and prayers continue to be with everyone affected by the tornadoes in Nashville.