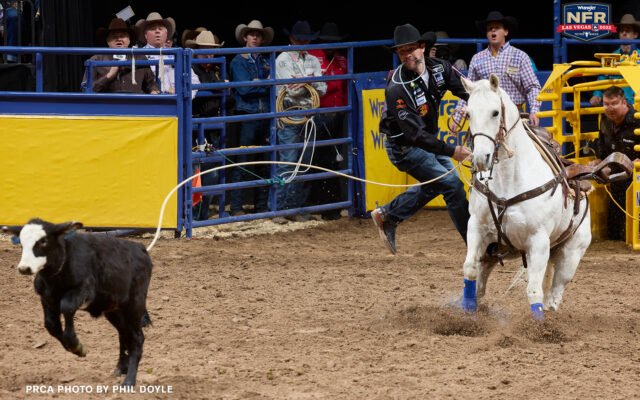 Round 8 of the Wrangler NFR has been special for Hunter Herrin.

For the second year in a row, the Apache, Okla., cowboy won Round 8 at the NFR. His latest accomplishment came Thursday with his 7.2-second run. A year ago, he won Round 8 with a 7.1 second run.

“(I’ve) been pretty sick all week but these last couple of nights have made it a little better,” said Herrin, who is making his 12th NFR appearance

“It’s been my best run,” said Herrin, 38. “Last night I had a chance to go seven something  and I kind of balled my string a little bit but tonight I was able to put it all together and stay out of my own way. If you do that, you might not win first but you can live with it – as long as you compete to the best of your ability, you can live with that.

“I just need to be the same as the last two nights. First and foremost, I have to get a good flat start. My horse is standing out in the box, and he can really get across there and gives me a good throw. The last two nights I’ve done that. And if that’s the case, it gives me a good chance to win something if the calves allow it so that’s just going to be our game plan: good starts.”