On Saturday morning at Drake University, hundreds of Democrats greeted Nancy Pelosi with a standing ovation.

“Thank God we do have the right leader at the right time in our speaker of the House,” Polk County Democrats’ chairman Sean Bagniewski said in his introduction.

“This is Trump Country and a place where we don’t really care what Mitt Romney thinks,” Iowa GOP chairman Jeff Kaufmann said, to cheers as he criticized a fellow Republican who has questioned some of Trump’s actions.

A few hours earlier, Pelosi had been asked by a moderator to describe a recent tense meeting in the White House.

“I don’t really like to start a Saturday morning talking about you know who,” Pelosi said and the crowd laughed.

In discussing the impeachment inquiry, Pelosi quoted one of the country’s Founding Fathers.

“We do believe the times have found each and every one of us, right now,” Pelosi said. 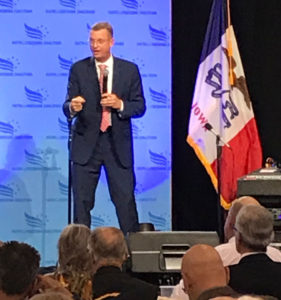 The keynote speaker at Saturday night’s Iowa Faith and Freedom Coalition banquet on the fairgrounds was Georgia Congressman Doug Collins, the ranking Republican on the House Judiciary Committee. He vowed to follow Pelosi around the country to criticize the impeachment inquiry.

“Don’t let the Democrats fool you and especially the two new ones from Iowa…You either stand with the president or you’re going to stand behind this president, because he will win again,” Collins said, to cheers.

“Trump in my view is the greatest president in my lifetime,” Scheffler said, to applause, “even greater than Ronald Reagan.”

Pelosi told the crowd of Democrats Trump has failed to live up to his oath of office.

“Has anybody every said: ‘This is the most important election of our time?’, sadly, they just keep getting more urgent,” Pelosi asked, prompting laughter and applause from the audience. “…This one is. One term. It’s essential.”