Steer Wrestler Jason Edler from Iowa won the 2020 World Championship and Average title in Arlington, Texas.  In his debut Wrangler National Finals Rodeo (WNFR) he entered the finals in ninth position. The top 15 contestants in the world standings qualify. 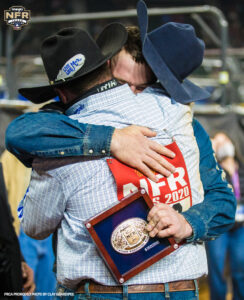 Following his tenth go-round run with 3.9 seconds, Edler had accumulated the top spot in the average.  He wrestled all ten head of steers in 43.40 seconds just .30 seconds ahead of Stetson Jorgensen from Blackfoot, Idaho. The average paid $67,269.23

Your emotions right now, what are they?

“I’m still trying to make everything come to reality right now. I don’t know
whether to cheer, laugh, cry, what I’m supposed to do. I’ve wanted this so bad and
I’ve worked so hard the last six years. Coming into my first NFR and doing this,
it’s unbelievable right now.”

Coming into today, what was your mindset?

“My thoughts were I knew it was going to be a one-hitter. I wasn’t the favorite
coming into today. I was a little bit of an underdog coming into today. I knew that I
really needed to take as much start as I could at that steer and have everything line
out perfect, and it ended up lining out perfect. Stetson, he’s such a great
competitor, he got a little bit of a bad draw today. I am ever so grateful for him
letting me ride his horse. Without Stetson Jorgensen, there is no way I could ever
done this.”

You guys spoke afterward. What did you tell him?

“I told him, thank you so much. Thank you for being a friend. One of these gold
buckles is headed your way. You bulldog way too good not to have one.”