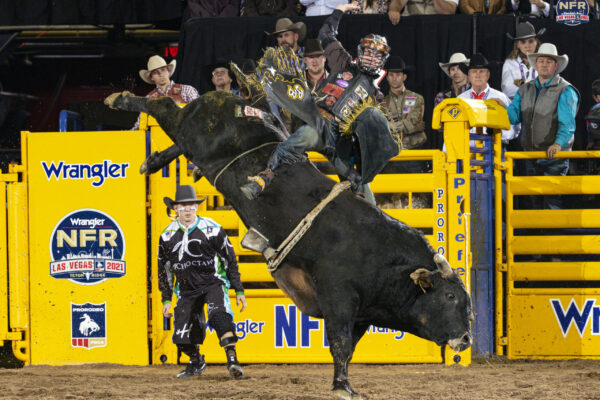 Colton Byram’s path in ProRodeo has not exactly been a yellow brick road. It began with COVID-19 and continued with a slew of unfortunate injuries. Despite the obstacles, the Kansas native continues to fight.

On Nov. 12, Byram clinched his latest victory at the PRCA Division 1 Xtreme Bulls Bulls in the Ballpark event in Round Rock, Texas. The bull rider topped the leaderboard with a 90-point ride on Andrews Rodeo’s Gold Rush, earning a $10,716 check. He relied on friends for advice.

“My buddies told me about him and said that he was really good. I just took their word for it, and I kept my hand shut,” said the 23-year-old. “He was out there for a couple (turns) around (to) the left, I stayed hooked, and we got it done.”

Byram’s latest victory marks a strong start to the 2023 campaign for him. Since Oct. 22, the bull rider has notched three rides of at least 89 points (89.5 points on Salt River Rodeo’s Kryptonite, 89 points on Three Hills Rodeo’s Late Bloomer). For him, he believes the success was the result of a strong mindset.

After missing the entire 2021 season due to injury, Byram rebounded in 2022. In his first full season, he found his way inside the top 20 of the PRCA | RAM World Standings with a month to go before falling ill, putting an end to his season. The season provided valuable lessons for Byram.

“Everything that happens, happens for a reason,” he said. “I tried to really be open to learning and just taking everything in, don’t rush it.”

Despite the rocky road, Byram continues to focus on earning a trip to Las Vegas, competing at the Wrangler National Finals Rodeo. The goal remains distant for now, but the early success is a start. In the meantime, Byram will continue to stick to his game plan.

“Stay mentally focused, physically primed up as I can be. Don’t waste a day and take advantage of everything,” Byram said. “It’s a long year. A lot of things can happen but as you stay positive and keep God on your side, I think everything will fall in place.”