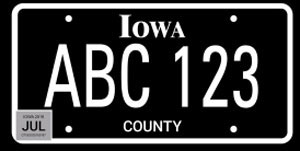 DES MOINES — The Department of Transportation released the much anticipated blackout license plate on Monday.

DOT spokesman Daniel Yeh says some orders are already waiting. “I’ve not counted yet — I just know from word of mouth from our clerks we’ve had several come in. We’ve had a couple people walk into our office in Ankeny to order it, which people can do. We’ve had a few come in through the internet,” Yeh says.  He says there could also be some orders in the mail too.

The Iowa Legislature created the new plate in April, which is all black with white lettering. Yeh says that simple design apparently appeals to some drivers. “People might like it just from the simplicity of it — just for the throwback look,” Yeh says. “Perhaps it just works better with some of their vehicles. If their vehicles are black or white or perhaps even gray.”

Lawmakers found that people were ordering personalized Dordt College plates that featured the black with white letters, and then covering the Dordt references. Now for an extra cost you can get the blackout plate.

Yeh isn’t sure how many of the plates they’ll sell, but says the legislature didn’t put on the normal restriction that 250 plates had to be sold before it could be produced. You now have several dozen choices for alternative plates. “The most popular plates are the college plates. I believe the University of Iowa plate is the most popular and then the Iowa State University is the next most popular. Those are roughly in the 25,000 to 30,000 range for the number of plates issued in the state,” Yeh explains.

While many cars and trucks do carry the specialty plates, most people stick with the standard issue. “We have more than four-and-a-half million vehicles issued in the state and more than 92% of them have a standard county-issued plate,” Yeh says.

For those who get  the blackout plate, Yeh reminds drivers they still have to put the annual registration sticker in the lower left corner of the plate. He says the stickers being issued right now expire in 2020 and are green. “We are sorry if that messes up the vibe for your car, but that is a necessary item so that law enforcement knows that your plate is validly registered.

One other license plate was also released today. “In addition to the blackout plate, we also released the Morningside College plate, so that’s also available for order,” Yeh says. He says once the plate is ordered and approved it will take between two and four weeks for it to be mailed to your county treasurer for you to pick up. The money from the license plates goes into the Road Use Tax Fund to pay for state, county, and city road and bridge projects.