Britt on The Road
Rodeo 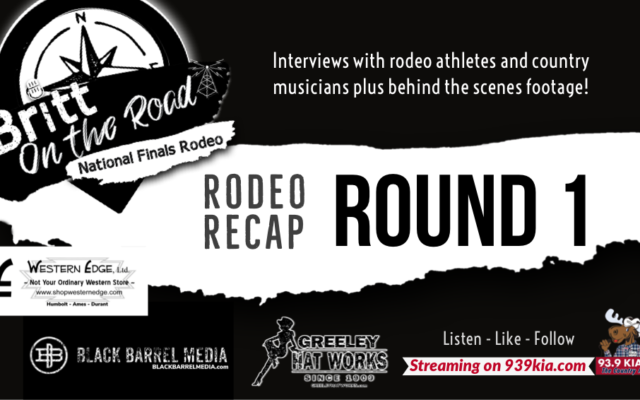 The primary horse Hanchey was aboard all season – TJ – passed away. The horse was owned by Logan Bird.

Hanchey said the loss wouldn’t set him back at the Wrangler NFR and it didn’t – at least for Round 1.

Pope made his first appearance at the NFR in Las Vegas and didn’t miss a beat capturing Round 1 of the 2021 Wrangler NFR with a 90.5-point ride on Pickett Pro Rodeo’s Night Crawler.

“It was an awesome ride, that’s the kind of horse everyone wants to get on,” said Pope. “They are souped up hoppers. They are like riding a dang rocking chair and one you want to get on every time. I was super excited. She had a lot of up and down.”

Pope said he had never been on that horse before Thursday.

Wade/Yates set the pace in team roping in Round 1

Team ropers Tyler Wade and Trey Yates had a great opportunity to go fast in Round 1 and that’s exactly what they did.

Wade/Yates stopped the clock in 4.0 seconds to claim the title.

“You kind of have to block the crowd and everybody out because you have to focus on what you do good,” Wade said. “I just wanted to stay focused, and I have faith in our run and our horses and Trey. I’m just ready for the next nine days.”

Yates concurred with his partner.

The steer wrestling Round 1 victory by cowboys Dirk Tavenner and Riley Duvall as each clocked 3.7 runs.

Two-time saddle bronc riding world champion Zeke Thurston and Chase Brooks were ready to go in Round 1 at the Wrangler NFR – and it showed.

Thurston and Brooks share the Round 1 win in Las Vegas.

Thurston had an 88.5-point ride on Cervi Championship Rodeo’s Vitalix Wyatt Earp and Brooks came through with an 88-point trip of his own on Sankey Pro Rodeo & Phenom Genetics’ Pendleton Whisky’s Marquee.

Cheyenne Wimberley and Amanda Welsh got off on the right foot at the Wrangler NFR as they split the Round 1 win. Each had 13.77 second runs.

Wimberley’s Round 1 victory checked a box she’s been waiting awhile to accomplish.

all information courtesy of the PRCA.