“It’s time for us to stop being quite so humble about all we have to offer and to start changing the conventional thinking about Iowa,” Durham said.

Durham’s agency has used part of its annual $5 million marketing budget to produce a YouTube video. It shows New Yorkers viewing real estate they think is nearby, but it’s really in Des Moines, Dubuque, Waterloo and Council Bluffs. The actress portraying a realtor eventually reveals the properties are in Iowa — and the New Yorkers shared their reactions.

“All of those were places I would very much want to see myself living in,” one man said.

A woman in the video said: “I didn’t think that the homes in Iowa would be that modern.”

Australia native Alex Hall sold his restaurants in New York, moved to Iowa — his wife’s from Urbandale, Iowa, and has opened three restaurants in Des Moines. Hall and his wife have built what Hall calls their “dream home” here. 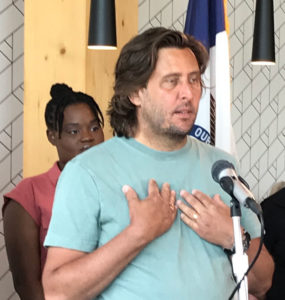 “The perception of Iowa and Des Moines, especially….it’s so skewed from reality and it is very frustrating,” Hall said. “…I see my employees. We have 65 employees now, the majority of them under 30 years of age. They have great apartments. These kids in New York would do anything to live in anywhere near an apartment like these. I brought two guys with me from New York. They love it here and I don’t think will ever go back to New York.”

Governor Kim Reynolds held a news conference in one of Hall’s restaurants to tout the new “This Is Iowa” campaign.

“Many people around the country don’t realize the culture and lifestyle that we have to offer,” Reynolds said. “This campaign will showcase all the great things Iowa has to offer visitors and residents, like amazing local restaurants.” 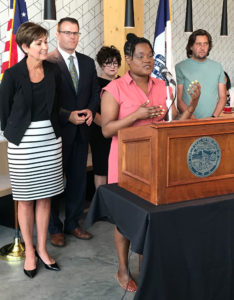 Antoinette Stevens, who grew up in an Atlanta, Georgia, suburb, also spoke at the governor’s news conference. Stevens had no ties to Iowa when she did an internship at Principal Financial in Des Moines. She accepted a job at Principal when she graduated from the University of Georgia in 2015.

“In three weeks I start my new job for a company that’s based in San Francisco, but I chose not to leave Des Moines,” Stevens said. “…San Francisco is expensive, but I have built a network here and a support group here really helps me be the kind of person I want to be and I’m not ready to leave that.”

The state’s “This Is Iowa” campaign will target travelers, as Iowa Economic Development Authority research indicates about two-thirds of the people who travel to a new place consider moving there, but do not follow through because they don’t have a job lined up. Iowa’s population growth ranks 29th in the nation according to the U.S. Census Bureau and many Iowa businesses say they cannot find employees with the right skills.