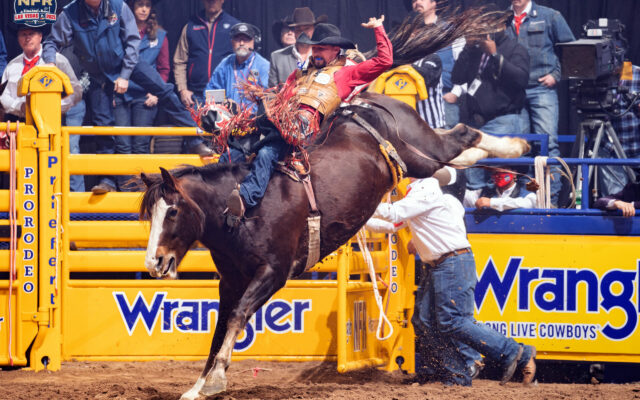 After his debut appearance at the 2021 Wrangler National Finals Rodeo presented by Teton Ridge in December in Las Vegas, Garrett Shadbolt sought to improve his craft.

The Merriman, Neb., cowboy stuck to his word, claiming his first victory of the 2022 season at Rodeo Rapid City (S.D.), Feb. 4.

“He left there with a couple of big jumps and was really getting a lot of airtime,” Shadbolt said. “That first jump, he let it go and jumped way up in the air. I just threw that free arm straight back and set in there and knew things were going to be good.”

After failing to make it out of the qualifying rounds in Fort Worth, Texas, Shadbolt hoped to use Rapid City as an opportunity to remain in the mix in the PRCA | RAM World Standings, which he did after earning $5,041.

“This is really big for me because I didn’t get a lot done in Fort Worth,” Shadbolt said. “Everyone else was winning some money down there and I really wanted to make up for it and I think I did in Rapid City. That’s going to keep me in the wolfpack with all these top guys. I want to be right up there with them trying to beat them.”

“It’s just about continuously improving on your craft. I spend a lot of time analyzing my rides. I put a lot into just trying to improve,” Shadbolt said. “I don’t want to plateau. I want to keep improving.”

Shadbolt’s next stop is at the San Antonio (Texas) Stock Show and Rodeo, which begins Feb. 10, where he hopes to build off his recent success.

“For me, making that ride in Rapid City, it highlighted the way I want to be riding this year, the way I know I can be, and I hope to keep riding that well,” he said.