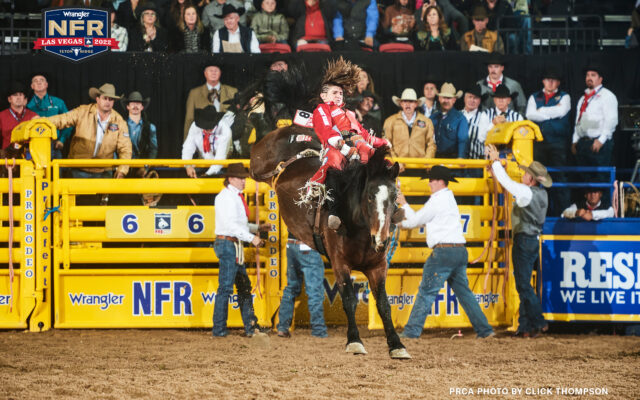 This wasn’t the script rookie Rocker Steiner had envisioned – until Tuesday. Steiner had an 88.5-point ride aboard Wayne Vold Rodeo’s True Grit to win Round 6.

“It is always great to get a win, especially at the NFR,” said Steiner, 18 of Weathrford Texas. “My dad won here, and my mom won here, and it is great to win in the same place where your parents won.”

Steiner, who placed in just one of the first five rounds, splitting fifth in Round 5, took a moment to describe his winning ride.

“That was a real fast, snappy, droppy (horse), it is not easy to ride,” Steiner said. “You have to have the need for speed to ride that horse. That horse actually bucked me off in Strathmore (Alberta) and it is just not an easy horse to ride.”

The emotions of Steiner have been well-documented at this year’s NFR, but he is not about to change his ways.

“I think you all can tell I’m really competitive,” Steiner said. “I didn’t come here for second place. I didn’t come here to get a low score. I’m not going for third or fourth. I’m going to win. It is hard to hide my passion and my emotions. I just want to win.

“I’m going to go to South Point and get a buckle and hang out with my family. We are going have a big crew on stage. There have been a lot of people with me my whole career and hopefully I will get everybody on stage who has been part of it.”