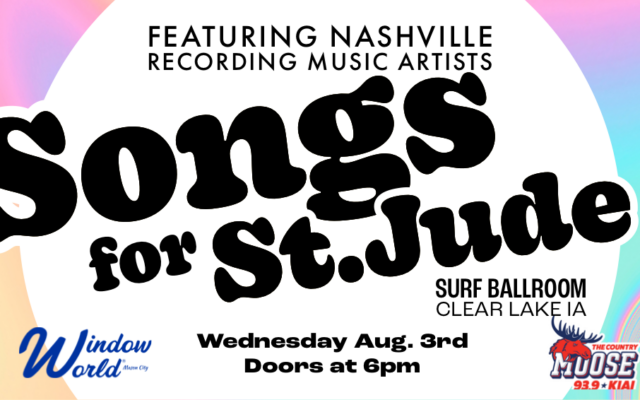 IT’S A NIGHT OF LIVE MUSIC YOU DON’T WANT TO MISS!

Songs and Stories with Nashville Recording artists showcased on the main stage of the Surf Ballroom.  Window World of Mason City brings in Jenny Tolman, Flat River Band, Nic Johnson, and Nathan Dean and the Damn Band bring their music to you! JOIN US WEDNESDAY AUGUST 3TH for this writers in the round style show. It is a free will donation show to benefit St. Jude Children’s Research Hospital.  Along with one of a kind country music silent auction items like concert tickets, festival campsites, paintings, local business donations and even a signed guitar from the performers at Country Thunder Iowa!  This is a unique interactive experience! Listen to the musicians perform some of their hit songs and tell the stories behind them, bid on the silent auction, and take some photos in the new photo booth!

DOORS OPEN AT 6, SHOW AT 6:30. IT’S A FREE WILL DONATION SHOW FOR ST JUDE INCLUDING ONE OF A KIND COUNTRY MUSIC SILENT AUCTION ITEMS

Below are videos from each of the artists.

Want to donate now? CLICK THIS TO DONATE NOW

The Surf Ballroom has The Surf Sounds Summer Concert Series, formally known as the Summer Showcase Series, features live music by various artists from all over and will be hosted on Wednesday evenings from June 8-August 17, 2022 on our main stage. Join in on the fun and support live music at the same time!

Jenny Tolman: Sweet yet sassy, vintage yet fresh, an old soul with a new vision and some incredible comedic timing, country music songstress Jenny Tolman is the breath of fresh air that the genre needs now. Having woven the incredible storyline of her life into her music thus far, Tolman has found a way to create albums which tie up all that life has handed her – both the good and the bad and the downright tragic – and makes it sound beautiful. On her new album Married in a Honky Tonk, Tolman brings a kaleidoscope of stories and emotions to the country music table with the swagger of a certified superstar.

Country Trio Flat River Band has released a video featuring The McCrary Sisters, in support of their new radio single, “Shining Through My Window,” The trio of brothers, Chad, Andy and Dennijo Sitze, have a wealth of musical talent and experience, having played and toured with their family’s band since they were very young.

Nic Johnson is an American guitarist and songwriter whose music includes funk, blues, rock & roll, folk, country, & jazz. He has worked continuously through his career on his own writings, recordings, performances, & teaching. He is a core member of musical group Midwest Dilemma.

Founded in Arizona in 2005, Nathan Dean and the Damn Band are a prime example of hard work paying off.   Playing well over 200 shows a year and regularly touring across the country they’ve gone from a weekend warrior bar band to a high energy, crowd pleasing, headlining band.Thanks mostly to their drive and their incredible fan base.  From catchy and heartfelt originals to country/rock and pop favorites once you see a show you’ll understand why they’re one of the most sought after bands on the touring scene right now.   They’ve shared the stage with artists like: Dylan Scott, LOCASH, Big and Rich, Cody Johnson, Randy Rogers Band, Diamond Rio, Eric Church and countless others…..   They were recently nominated for 3 Josie awards in 2021 for Entertainer, Artist and Group of the year.  Make sure to catch a show on their 2022 Test Drive Tour this summer!!