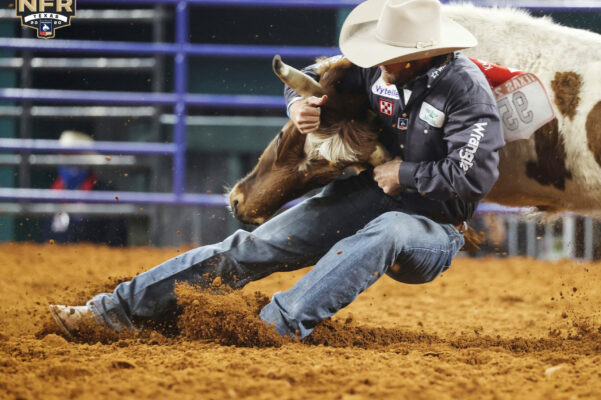 Steer wrestler Dirk Tavenner, a qualifier to last year’s Wrangler National Finals Rodeo, will be sidelined for the remainder of the ProRodeo regular season after suffering an injury at the Cinch Playoffs, Sept. 8 in Puyallup, Wash.

He said the right arm injury occurred during his first run at the event. Tavenner was forced to miss the remainder of the Cinch Playoffs.

“I won’t be back for the rest of the regular season, but I’m hoping to be back for the (NFR),” said Tavenner, 32. “Four to six weeks off is what we are looking at right now. I strained my bicep, tore my pectoral muscle, and strained or possibly tore my rotator cuff as well.”

As of Sept. 19, Tavenner is sitting 12th in the PRCA | RAM Standings with $84,532, he’s expecting to qualify for his second Wrangler NFR this season. He said right now the plan is to avoid surgery and focus on physical therapy leading up to December.

“I shouldn’t need surgery, right now they don’t think so anyway. I’ll start rehab next week on Monday. Hopefully it’s just four weeks of taking it pretty easy,” he said. “I’m hoping I can start practicing again in November to prepare for the Finals.

“My goal is to be back for my Circuit Finals, which is in Heber (Utah) in the first weekend of November (4-5). That’s kind of what my game plan is right now.”

The Wrangler National Finals Rodeo is set for Dec. 1-10 at the Thomas & Mack Center in Las Vegas.