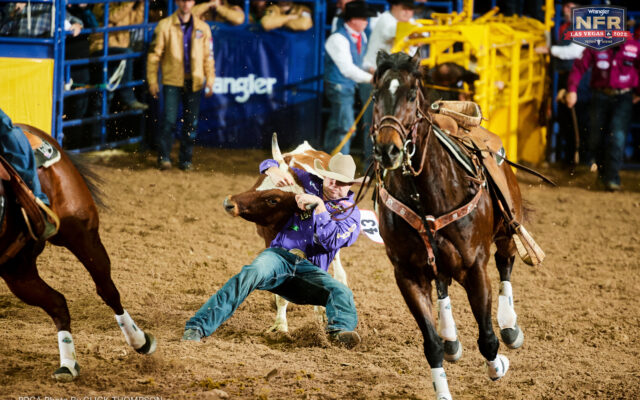 Tyler Waguespack is no stranger to winning world championships – but his fourth world title on Saturday night was a bit improbable.

The favorites to win the world – Stetson Jorgensen and Will Lummus – stumbled. Jorgensen received a no time in Round 10 and Lummus broke the barrier. In came Waguespack to win his fourth world title. Waguespack also was the world champ in 2016, 2018 and 2021 and 2022.

Waguespack finished atop the world standings with $268,881. He narrowly defeated Lummus who finished with $266,188. Waguespack split fourth in Round 10 (4.0 seconds) and was third in the average with a 57.1-second time on 10 head.

“I feel undeserving of this world title,” Waguespack said. “That was the craziest round of steer wrestling I have ever seen. Will Lummus bulldogged great all week long. The steer he had tonight actually took me out of the average earlier in the week that’s the steer I got the barrier on. I would have never thought that would happen. Will should be sitting here instead of me. I was the lucky one who came out on top at the end. That was one of the craziest rounds I have ever watched.”

“This is so awesome,” Waguespack said, “I grew up watching all my heroes and dreaming about having one gold buckle, you know. Ote Berry is one of my biggest role models and biggest supporters and helped me out so much. I can’t wait to see him here in a little awhile because I have got the same amount he does, and I get to rub it in that I am still going so maybe one day I will get lucky and get one more on top of him.”