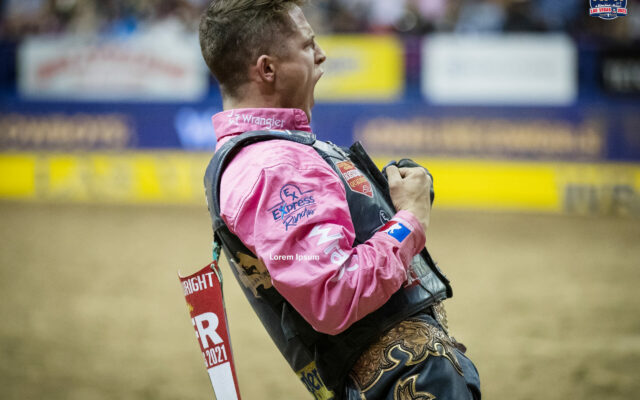 Stetson Wright repeats as Cheyenne (Wyo.) Frontier Days Champion
CHEYENNE, Wyo. – Stetson Wright has proved over his five-year ProRodeo career that he’s never been afraid of the big moment, and he proved that once again in front of a near sellout crowd of 19,000 spectators in Cheyenne, Wyo., July 31.
Looking to defend his saddle bronc riding title from a year ago, Wright matched up with Sankey Pro Rodeo & Phenom Genetics’ Pendleton Roundup’s Marquee and made it count. The duo put together an 88-point trip to capture the coveted Cheyenne Frontier Days title, a key stop on the NFR Playoff Series presented by Pendleton Whisky.
“That horse was really good, I knew I needed to get a good strong mark out on her to setup the whole ride,” said Wright, a five-time PRCA World Champion. “She kind of jumped down the gate, which made me question whether she was going to hit my leg or not. I was able to hold through it and luckily everything went well. Then once she started setting up it just felt amazing.”
It’s been nearly a month since Wright was forced to miss the Cowboy Christmas run with a wrist injury that required surgery. He admits there has been mental hurdles to get over, but he feels like he’s back in a good position with nine weeks left to go in the regular season.
“There are definitely no excuses when you’re out here rodeoing,” he said. “If you show up no one wants to hear you cry. I feel like I’m back. I finally got all my doubt to myself out of the way. This is a really good way to cap off the week here in Cheyenne.”
In total, Wright walked out of Cheyenne with $12,198 added to his name. He currently sits No.1 in the PRCA | RAM World Standings in bull riding and third in saddle bronc. He said while this win is an important confidence boost, he knows there’s still a lot of rodeoing left.
“I try not to overthink anything when I’m doing good or I’m doing bad. The only thing that runs through my head is I’m healthy, wealthy, handsome, and happy,” Wright said. It’s been the same for years and that’s how I look at it.
“I think it helps me some that I don’t ride the highs or the lows. I just try to stay even keel. As excited as I want to be right now, I’m trying to keep it calm, cool, and collected. There’s nine weeks left, so it’s far from over. I’m just going to keep chipping away at it.”
Other winners at the rodeo were all-around cowboy Coleman Proctor ($19,590); bareback rider Tim O’Connell (88.5 points on Sankey Pro Rodeo & Phenom Genetics’ Sozo); breakaway ropers Macy Young and Tiffany Schieck (4.0 seconds each); tie-down ropers Cory Solomon and Ryan Thibodeaux (10.3 seconds each); team ropers Clay Tryan/Jade Corkill (7.5 seconds); steer wrestlers Trell Etbauer and Justin Shaffer (5.4 seconds each); steer roper Ora Taton (13.6 seconds); barrel racer Andrea Busby (17.13 seconds); and bull rider Brady Portenier (92.5 points on Stace Smith Pro Rodeos’ Let’s Gamble).
The information enclosed in this release is courtesy of the Professional Rodeo Cowboys Association (PRCA)
More about:
rodeo