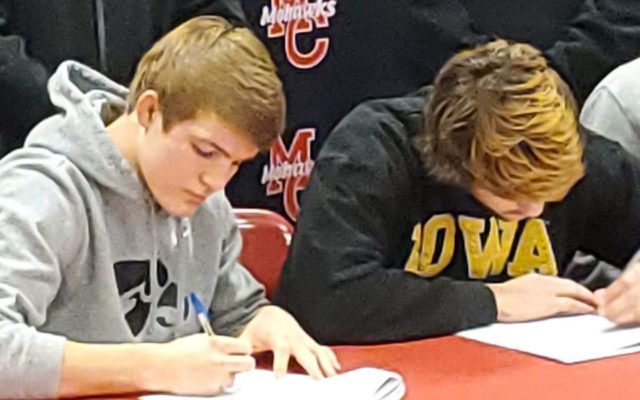 == After making verbal commitments back in September of last year, Mohawk wrestlers Cullan and Colby Schriever signed their letters to attend The University of Iowa. Cullan is a two-time state champion, winning back-to-back state crowns at 106 pounds in 2017 and 2018 before being injured during the 2019 state tournament and finishing 6th at 120 pounds. Colby is a three-time state qualifier, placing 7th at 126 pounds in 2018 and 2nd at 138 in 2019. Colby and Cullan both say they’ve always wanted to wrestle at Iowa.

Cullan and Colby talk about wrestling for Iowa coach Tom Brands and his staff.

The Schrievers talk about what they are working on to improve in the upcoming high school wrestling season and beyond.

Practice starts for the Mohawk wrestling team on Monday with the season opening up at home against Ankeny on Thursday December 5th. Listen to our full interview with the Schrievers here 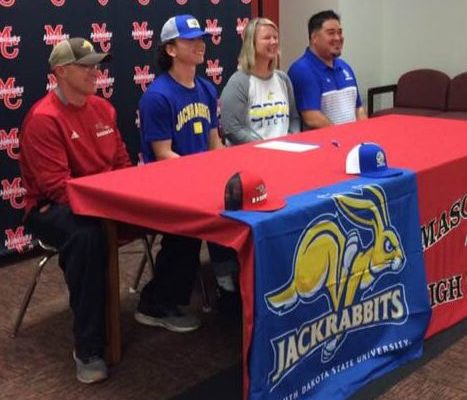 Mellman talks about the style of the Jackrabbit program.

Mellman this past summer hit .310 with five homers and 18 runs batted in, stealing 21 bases. Listen to our full interview with Mellman here. 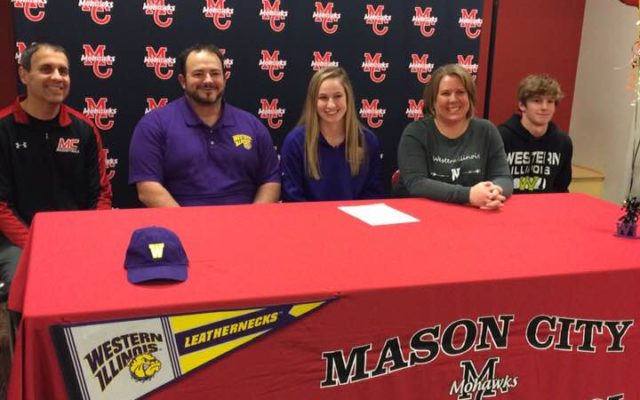 == Anna Deets inked her letter to play basketball at Western Illinois. Deets says she considered a number of schools before making her choice.

Deets says Western Illinois’ program is on the rise after some tough years.

Deets talks about how she thinks she’ll fit into the Western Illinois program.

Listen to our full interview with Deets here

— The Osage volleyball team swept Grundy Center in the 2A state quarterfinals yesterday in Cedar Rapids, 25-17, 25-14, 25-16. Paige Kisley had 16 kills and nine digs while Ellie Bobinet had 26 assists and 10 digs to lead the Green Devils into today’s semifinal round. Osage will face top-ranked Western Christian of Hull at 4 o’clock this afternoon, as Western Christian swept Hudson. In the other side of the 2A bracket, Clarion-Goldfield-Dows swept Wilton 25-23, 25-20, 25-17. The Cowgirls will face Beckman of Dyersville in the other semifinal as they swept Van Buren County.

MASON CITY – The #3 NIACC women’s basketball team claimed a 89-63 victory over Iowa Western Wednesday night on Autism Awareness Night in the NIACC gym, as you heard on KGLO.

Freshman guard Sierra Lynch led five Lady Trojans in double figures with 17 points in the non-conference win over the NJCAA Division I Reivers.

Also in double figures for the Lady Trojans (5-0) were Sydney Wetlaufer with 16 points, including five 3-point goals, Sana’a Smith and Kelcie Hale both scored 15 points and Allie Negen scored 12 points.

NIACC was 13 of 27 from 3-point range. Besides Wetlaufer’s five 3-point goals, Smith, Hale and Negen all had two 3-point goals and Lynch and Abby Leach both connected on one 3-point goal.

NIACC’s win over Iowa Western was its first over the Reivers since the Lady Trojans claimed a 98-89 victory in the 2017-18 season.

Sophomore Wendell Matthews recorded a double/double with 22 points and 13 rebounds to lead NIACC. It was Matthews’ fourth double/double of the season and the 12th of his career.

NIACC returns to action Friday at home against the Grinnell College Junior Varsity. Game time is slated for 7:30 p.m. in the NIACC gym.

IOWA CITY — Iowa women’s basketball coach Lisa Bluder says her team will need an outstanding defensive effort on Thursday night when the Hawkeyes host North Alabama. The Lions are 2-0 and scored 128 points in a win over Virginia-Lynchburg.

Bluder wants to see improvement after the Hawkeyes opened a week ago with an 85-53 win over Florida Atlantic.

You can hear the Iowa-North Alabama game on KGLO tonight starting with the pre-game at 6:15

Drake faces Simpson at home on Sunday. Kansas City faces Milwaukee on the road on Friday.

Cameron Allen had 16 points for the Roadrunners (1-2).