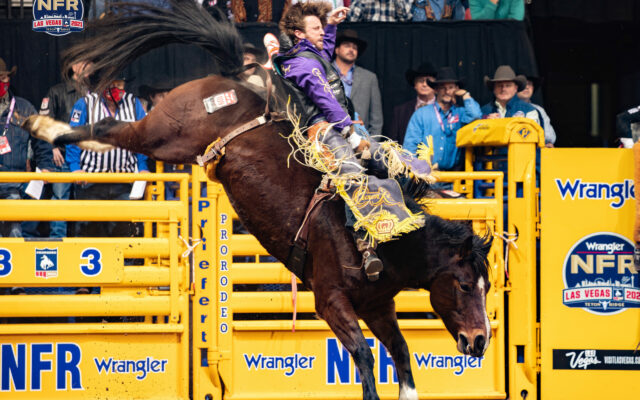 Just a smidge over $2,000 separated Tilden Hooper, who was 13th in the PRCA | RAM World Standings, from the 15th spot in the standings and the cut-off mark for earning a trip to the Wrangler National Finals Rodeo, when Hooper landed in Southern California on the final weekend of August.

Eight short seconds and 89 points later, Hooper added an additional $6,451 cushion as he seeks his ninth trip to Las Vegas for the Finals after winning the Rancho Mission

Hooper rode Rosser Rodeo’s Gold Coast for the win, a horse he’s matched up against in the past.

“Like a hundred years ago,” Hooper joked. “I was really excited to draw that horse. I knew I had the potential to be in the top five. When she jumped out there and gave it up like she did, we went from top five to first real quick. I was excited to get that win.”

The big win, along with strong performances over the weekend in Bremerton and Kennewick, Wash., came at a crucial point for Hooper and it marked his third time to win the prestigious rodeo, a huge one head, two-day rodeo limited to only the top 30 in the world standings.

“This rodeo is so cool, and it’s been clutch for me, well, at least three times,” Hooper laughed. He won previously in 2014 and 2018. “It was one of the first to go all-in on the one-head and really sell it. It’s been one of my top five rodeos that we go to all year for a long time.”

The Rancho Mission Viejo Rodeo celebrated its 20th year in 2022 and a return after a two-year absence due to the COVID-19 pandemic.

“I appreciate the chance to get in front of this crowd, a group that really appreciates the rodeo,” Hooper said. “And I think anywhere you’ve had success before, you’re just a little more comfortable, more confident.”

As the 2007 Resistol Rookie of the Year, Hooper is definitely a veteran and acknowledges it gets harder and harder to head out on the road since the birth of his little boy, Tell, in January 2021.

“Traveling used to be my favorite part of rodeoing,” he said. “But it’s harder now when I’m leaving behind a beautiful wife and my little boy. I’m thankful I’ve been able to do this for as long as I have.

“There’s so much money left to win in September,” he noted. “There’s about $60,000 between me and (world leader) Jess Pope and I’m going to do my best to make that up.”

all information courtesy of the PRCA Pro Rodeo Cowboy Association