CHARLES CITY (RADIO IOWA) — Clean-up is underway in Charles City after a tornado tore through the fairgrounds and damaged homes in the area early Monday afternoon.

Floyd County Fair Board President Amy Staudt was there as the twister tore through the complex.

“Literally, like people have said before, it sounds like a train coming,” Staudt said. “I thought the noise was too big and I popped my head out and glass started shattering. We lost a couple of windows up top out of the cupola area and I thought that was the worst of it when it passed, then I looked out the window…and half the buildings are leveled out here.”

Volunteers arrived to deal with the damage as soon as the storm moved out, but Staudt is wary of having people working in some of the buildings on the fairgrounds. 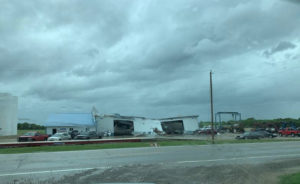 “We’ve got to make sure they’re structurally safe to be in because they’re twisted,” Staudt said. “That’s my main concern. The ones that are standing — are they safe to be in right now? We’ll meet with the adjusters and have some contractors out here and just double-check all safety issues.”

The twister tracked to the north and east and nearly missed Charles City, according to Floyd Emergency Management Director Lezlie Weber.

“There is one housing development that got hit,” Weber said. “Almost all the damaged houses have been contacted and we know of no injuries or fatalities. We just want people to stay out of the area for right now.”

Weber said it’s too early to discuss damage estimates, but there’s an emergency operations center at the Floyd County Courthouse where citizens can report damage.

“Get as many pictures as they can of everything, just in case, and then here probably after a while we’ll have some volunteers calling people that need help cleaning up and get some people out there to help clean up their yards,” Weber said.

Another tornado touched down northeast of Elma shortly after the first tornado. It tracked through Chickasaw and Howard Counties before leaving a path of damaged homes, roofs and downed power lines in Lime Springs, where house-to-house searches begun in mid-afternoon Monday.