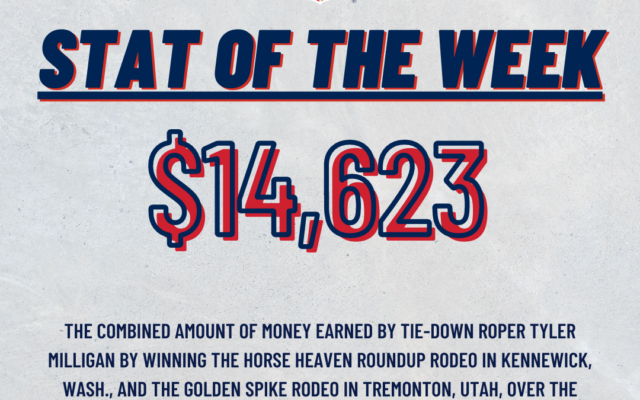 A horse boasts beauty, strength, and power. They carry riders with humility and pride. Finding the right one in tie-down roping can be complicated, though, because of the required chemistry. Tyler Milligan lost his 17-year-old ride Tequila to injury a few weeks ago in Calgary, leaving him to mix and match down the stretch.

The 26-year-old found the right combination this weekend at the Horse Heaven Roundup Rodeo, winning the three-head average with a 24.6 time in Kennewick, Wash. It required three different horses before Milligan sealed the title on Snoopy with an 8.5-second run in the finals, netting $8,952 in prize money.

“Anytime you get to this time of the year, everybody compares it to the fourth quarter of a game. Anytime you win, especially a tour rodeo, it helps a lot,” said Milligan, who hails from Pawhuska, Okla. “I was the last guy to go out. For some people it puts more nerves on them. But I really like knowing what I have to do.”

Snoopy is Luke Potter’s horse. Milligan used to own Snoopy for a bit, so there was familiarity. The plan was simple.

“I drew good calves. I just tried not to overthink anything,” Milligan said. “You have to keep your focus. That’s what I tried to do.”

Viewing his performance through a small prism is paying off. Milligan also won the Golden Spike Rodeo in Tremonton, Utah, with a 7.9-second run, claiming a $5,671 prize. The flurry of success has placed Milligan firmly in the Top 15 of the PRCA | RAM World Standings with roughly a month left in the season.

It’s impossible to overstate how much a strong finish means to Milligan, who is looking to post his third Wrangler National Finals Rodeo qualification after missing the sport’s top event last season.

“It feels good. Last year was a down year. I didn’t have a horse I got a long with,” admitted Milligan, who also has posted victories in Fort Smith, Ark., and San Angelo, Texas this season. “It’s been really good. I just have to keep it going.”

And that could mean riding different horses. He will use 8-year-old Rotel in upcoming events, while admitting he’s a “little green,” with hopes that Tequila returns for the finals.

“We will see what happens,” Milligan said. “Whatever happens, I have to keep doing my job.”

the information enclosed in this release is courtesy of the Professional Rodeo Cowboys Association (PRCA) for media use.