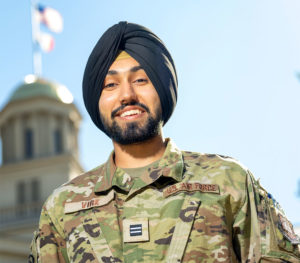 IOWA CITY — A University of Iowa student who is in the Air Force ROTC program is the first cadet in the country to get a waiver to wear a beard and turban while in uniform.

Gursharan Virk applied for waivers so he didn’t have to choose between his Sikh faith and his dream career of being a pilot. “The beard did not take that long — the beard waiver came in pretty quick — I think within a month or two. But the waiver from my turban took about eight to nine months to get completely approved,” Virk says. “I had to turn in a letter explaining why it was important and why, what it meant to me. And then I had an interview with the Air Force chaplain.”

He says the meeting with the Air Force Chaplin was more like a conversation on why it’s important to him.”Sikhs wear turbans basically…. you stand out in a crowd. And historically, Sikhs used to be people who help out others, where there’s a need. Our basic rules are just caring for humanity, in general,” Virk explains.

Part of being in the military is wearing the same uniform and being part of the team. Virk says he understands that concept, but doesn’t think the accommodations will change anything. “We are all pretty close, I haven’t felt anything at all. So I don’t think it’s going to be an issue because and as for the uniform as well, like I’m in regulations,” he says.

Virk was born in Des Moines, and then his family moved to India while he was still young. He returned to the US. for the start of his junior year at Waukee High School. Virk is a junior at Iowa and is hoping to become a pilot and fly bombers when he graduates — but would take any pilot spot offered.

“Pilot slots have always been very competitive. So it is a very competitive process to get one. So I’m in that process right now,” Virk says, “basically making up my profile right now. I had a couple of tests I had to give. And basically, they send my entire profile to the big pilot board.” He should l know by the summer of next year if he gets one of the coveted pilot slots. If the pilot position doesn’t work — Virk wants to be a combat systems officer.