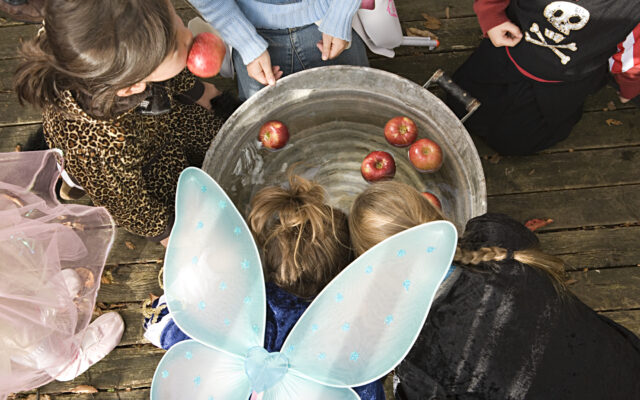 What’s the origin of bobbing for apples?

According to History.com, bobbing for apples started out in many European countries as a common way for young lovers to court one another. While there were many versions of the game, each apple definitely represented a special someone. If the bobber, typically female, successfully bit into the apple with the name of a love interest in one go, then fortune favored the lucky couple and fate gave them the go-ahead. If it took the bobber two attempts, then they could still try it out but their love wouldn’t last a long time. Sadly, if the bobber needed three attempts to bite into the apple, then the stars weren’t aligned for this couple and it would probably be best to not pursue it at all.

Of course, as history progresses so too do the traditions. Similar to the tradition of having good fortune after catching the bride’s bouquet toss, another variation of bobbing for apples is the first person to bite an apple would be the next one in the group to have a marriage. If a girl bit into an apple and placed the fruit beneath her pillow, another superstition claims, she would see her true love in a dream.

Apples have long been associated with Halloween. Have you ever heard of the Halloween game “Snap Apple”? This popular game is similar to bobbing for apples in that people attempt to take a bite out of an apple. However, unlike bobbing for apples, in Snap Apple the apple is pierced with a stick on one side while the other has a candle, so there’s the added challenge of not getting covered with hot wax while trying to play the game and take a bite out of the moving apple spinning about the room! This game was so well-known and played by so many people during harvest season in England and Ireland that people tended to describe October 31 as “Snap-Apple Night.” Here are 25 more Halloween games to get you in the spooky spirit.

Why do we bob for apples on Halloween?

To understand modern Halloween traditions like bobbing for apples is to understand Halloween history. The Celtic holiday Samhain (pronounced “sow-win”) is normally celebrated from October 31 to November 1 to signify the end of summer and welcome in the new fall harvest and “the dark half of the year.” The Romans and then the Christian Church took Samhain and adapted it, eventually trying to imagine Samhain as a Christian holiday. In short, according to History.com, Pope Gregory in the 9th century declared November 1 as All Saints’ Day and November 2 as All Souls’ Day. Traditional pagan practices can still be seen on modern-day Halloween, or All Hallows Eve, on October 31.

European and Irish immigrants brought their traditions to the Americas, and that includes both pagan traditions and other traditions—like bobbing for apples. Likewise, bobbing for apples became more well-known as some Americans researched their roots and wanted to use this Celtic tradition for Halloween. Check out these 12 other things you probably never knew about Halloween.

A bit of safety to keep in mind

However, despite the romantic origins of bobbing for apples and the current-day childlike whimsical aspect of it, there are still a few dangers around this game to keep in mind for children today. Along with knowing how to trick or treat safely in 2020, parents should keep watch over their children if they elect to bob for apples, as kids can develop eye infections if the water isn’t clean. With all of the changes happening, here’s what Halloween could look like this year.