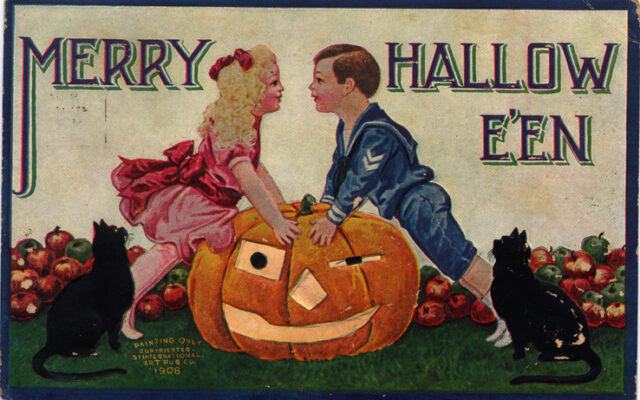 Merry Halloween. Vintage postcard. Printed in 1908.
Candy is an essential part of Halloween, but it hasn’t always been that way.
In fact, when American children first started trick-or-treating in the 1930s and 1940s, kids received “everything from homemade cookies and pieces of cake to fruit, nuts, coins and toys,” according to History.com.

People starting adding candy to their trick-or-treat traditions in the 1950s as candy companies marketed products for Halloween and by the 1970s, candy became the “only acceptable thing to hand out,” because parents were worried about homemade treats, according to the website.

As we approach Halloween and trick-or-treating, check out which candy was released the decade you were born.

Mars released M&Ms in 1941 and Bazooka bubble gum was introduced in 1947. Hershey created Almond Joys in 1948 and the company that made Smarties first opened in 1949.

Hot Tamales, the popular cinnamon-flavored candies, were introduced in 1950 and Pixy Stix were first sold in 1952.

Starburst – which was originally called Opal Fruits – was released in the U.K. in 1960 and came to the U.S. in 1967, according to Delish. Haribo Goldbears were also released in 1960 and in 1962, Lemonheads were released.

Nerds were invented in 1983 and Sour Patch Kids were introduced in 1985.